After the tragic loss of her father, Teshia found herself in a very dark, numb, and anxious place.

Then she found yoga, or maybe it found her? Either way she remains eternally grateful, as it is yoga that Teshia believes led her back to herself. The practice of Yoga asana helped Teshia calm her anxiety, it moved the emotions that then felt so stuck in her body and best of all, it helped her find her breath again.

Her students often ask her “How did you get so flexible? How long did it take to get a backbend like that?”

But for Teshia the goal was never just the posture or the depth in the posture; it was simply to heal and to learn the art of letting go.

That said, she did nonetheless embrace the practice with a great deal of intensity. She would often do backbends down her walls as a means of getting going in the morning, or sometimes at mid-day to keep herself from crawling back into bed. Teshia explains how backbends activate nerves up and down the spine; they produce tremendous amounts of endorphins while simultaneously opening and healing the heart.

When teaching Teshia can often be heard saying, “in the exhale lies the letting go,” and she truly believes that when we learn to connect with the breath, there is great opportunity and potential for expansion, growth, and levity.

Teshia’s immense gratitude for yoga inspired her to become a teacher. She completed the Bikram Yoga teacher training program in Acapulco Mexico in 2008, and a Yin Yoga teacher training in Toronto in 2010. Teshia believes these two yoga practices to be extremely complimentary; one is active while the other emphasizes surrender; the Yin and the Yang.

Teshia embraces her role as a yoga teacher with a selfless passion. She sees great potential and beauty in everyone that walks into her class, and she celebrates the opportunity to lead them on their own personal journey of self-discovery. Everyone comes into the room with a different history, yet everyone has a common goal: To better themselves. In her own words: “To witness such courage and transformation on a daily basis; this is the priceless gift I receive as a teacher. I feel so blessed.”

Teshia teaches public group classes as well as semi-private /  private yoga classes in downtown Toronto and the GTA. She also brings yoga into schools / classrooms, and corporate settings. In 2011 she began and continues to produce and host the yoga programming for the internationally recognized BodyRock.TV. Since early 2014 Teshia is also now hosting / leading incredibly trans-formative yoga retreats, at beautiful locations across the globe.

At just 17, Teshia intuitively knew that there were imbalances in her body. She was experiencing a lot of anxiety, very uncomfortable PMS symptoms, and watched daily as a rash on her leg continued to spread.

At the peak of her frustration, David Wolfe’s “Eating for Beauty” fatefully landed in her lap. It was there and then that Teshia’s passion was born and, simultaneously, her shift towards better health began. The next morning, so inspired by the book and the truth it resonated, Teshia began a vegan diet, eliminating processed foods, gluten, and dairy products. Perhaps it was extreme to take such a leap overnight, but to Teshia, there was no turning back.

During the first week on this new lifestyle, her belly became flatter and flatter. Teshia believes this was due to the removal of wheat from her diet, which had likely been creating chronic inflammation in her abdomen. By the next week, the huge rash on her leg (that had looked like a serious burn) also completely subsided. A month later, Teshia noticed she was quickly losing excess weight, her skin was clearer, her eyes brighter, and she observed a dramatic decrease in PMS symptoms. She also recalls feeling calmer overall and more in touch with her true essence. In other words, “the real Teshia.”

Since that time, Teshia has been on an insatiable exploration into all things nutrition, health, and food-related. She has experimented with every vegan/raw diet variation and has done many organ-detox programs. Teshia places great emphasis on eating a whole foods based diet, which Teshia believes offers incredibly opportunity for healing.

Having witnessed Teshia’s unwavering dedication to her health, and her commitment to become a better version of herself, many of Teshia’s close friends and family members have also become inspired to take control of their health, and eat / choose better.

Teshia believes we can thrive on any diet (plant based or otherwise) providing we find the way of eating that is right for US. We are unique beings, not one of us is exactly alike. Teshia believes in personalizing our diet based on our own unique health history, life-style, and personal goals / desires. This is what Teshia strives to help her clients achieve. 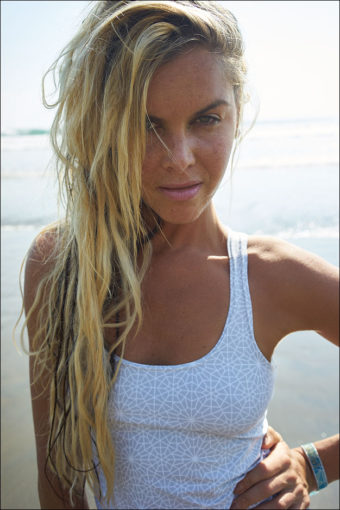 Teshia embraces her role as a Yoga teacher with a selfless passion, and sees great potential and beauty in everyone that comes to her class / consults her for Nutritional coaching. She believes this work is her dharma, and celebrates the opportunity to lead her clients on a journey of self discovery. Teshia has been teaching Yoga for 10 years, Nutrition for 8 years. She was the Eastern Yoga Champion of Canada in 2011 and the yoga host of BodyRockTV for several years after that. For the last few years Teshia has been teaching Yoga and Nutrition to a royal family in Dubai. NOW, running retreats are her primary focus, and she is beyond excited to unite her global community in one beautiful place!